Electric motors are used to convert electrical power (current, voltage) to mechanical power (torque, linear/ angular displacement). The first generation of electric motors were developed in the 1830s. Several scientists were involved in this development such as Thomas Davenport, Joseph Henry, Michael Faraday, etc. Although, the earlier invented motors couldn’t replace humans in any tasks, but they were important and indispensable to improve the next generations of motors.

Nowadays, electric motors are practically used in all fields and applications from nanotechnology to heavy industry thanks to their robustness, high efficiency, less noise and vibrations, cleanliness, etc. Moreover, electric vehicles factory is growing rapidly and replace internal combustion engines (ICE). Having more green cars in our planet can help to reduce toxic gases emission and global warming. In 2017, new record was registered by selling over 1 million electric vehicles, more than the half in China. Thus, the total number of cars in the road surpassed 3 million with an expansion of 50% compared to 2016 [1]. Estimations say that 125 million electric cars will hit the road by 2030 [2].
This augmentation is especially due to the creation of advanced electric motors offering many advantages such as lightweight, fast response, high speed and torque values, less heat, etc. Unlike combustion motors which develops usable torque for limited speeds, electric motors can work efficiently in a wide range of speed. They allow to generate high torques in large variety speeds and this can help to avoid the use of complicated gearbox and transmission systems. Moreover, the use of electric motors helps to reduce mechanical balancing since ICE creates linear motion through the piston, which is converted into rotation, while electric motors generates primary rotary motion.  Currently, different motor types are developed and manufactured such as induction motor, synchronous machines, brushed DC motors, brushless DC motor (BLDC), stepper motor, etc. In this article, BLDC motor will be studied.

Brushless DC motor consists of a rotor made of a steel core and permanent magnets, a stator made of steel core containing polyphase windings, and a non-magnetic shaft. Unlike brushed DC motor and as its name implies, brushless DC motor doesn’t contain brushes. In brushed motor, the rotor is supplied through commutators called brushes which control the rotation, the speed and the direction of the brushed motor. Since a BLDC rotor is composed by permanent magnets and doesn’t hold coils, the rotation of the machine is achieved and managed by supplying the stator windings. In addition to the above mentioned advantages of electric motors, BLDC machine is characterized by a high ratio of delivered torque relative to the size of the motor, which makes it a good choice for electric vehicles, where high power is required but lightness and compactness are critical factors as well. While BLDC motors are mechanically, they do require regulated power supplies and sophisticated control electronics.

In this article, a BLDC motor has been created and simulated using respectively SOLIDWORKS and EMWorks2D (see Figure 1). The proposed model has been studied in [3]. The BLDC model is automatically generated using MotorWizard. It is a motor software provided by EMWorks allowing both automatic design and simulation of electric motors. In addition to MotorWizard, EMWorks provides a 2D electromagnetic software (EMWorks2D) utilizing finite element method (FEM) and integrated inside SOLIDWORKS.

FEM simulation has proved its high capability to analyze complex electromagnetic problems and geometries [3]. It has been applied to electrical machines since 1970s. Finite element analysis (FEA) helps to overcome the challenges faced in studying and designing electric machines by providing the ability to consider machine geometry, nonlinear behavior of the magnetic material and winding distribution in the model. Moreover, ability to apply different boundary conditions to the model and calculation of different types of losses, makes FEA useful solution.

Although 3D solution can ensure complete and accurate results by considering winding end effects, skewing effects, local effects, etc, - which is not the case in 2D simulation- it requires larger computation time and higher computer resources. Therefore, in design process or fault study of the machine where several models and conditions are studied, using 2D approach is more desirable due to lower computation time and acceptable results. This can help to accelerate the development of more efficient and innovative motors.

Figure 1 contains the 2D geometry of simulated BLDC motor. It consists of a 3-phase machine with 12 slots and 6 poles. Hence, the symmetry angle of this motor is

mechanical degrees. The stator and rotor cores are made of steel (

). The rotor poles, having surface mounted structure, are made of ferrite permanent magnets (

). The shaft has non-magnetic material.

The double layers windings are arranged on 3 phases with a coil pitch equal to 1. Each phase has 1456 turns. 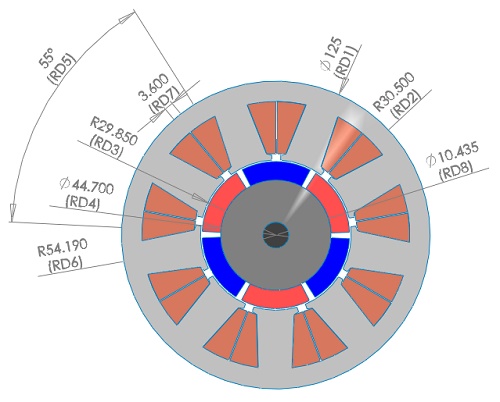 Below is shown the excitation signal of each phase. It consists of 3 ideal square-waves currents. The three-phase winding is connected in wye. However, at each position only two phases are supplied, and one is not excited.  Switching on and off between the phases depends on the rotor position and is repeated every 360 electrical degrees of the rotation. 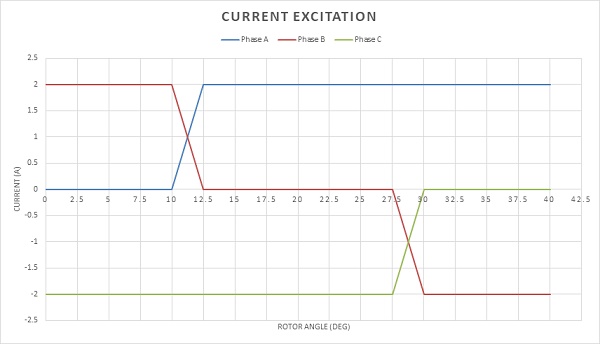 Since Eddy effects and iron losses are neglected in this simulation, a static magnetic analysis is performed. A parametric sweep study, of both currents and rotor position, is defined to compute the output torque and magnetic flux results. Moreover, Inductance and flux linkage results will be generated. Torque results will be compared to ref [3] results.

Meshing process is very crucial of an FEM simulation. Smaller elements size i.e. higher number of mesh elements, can enhance the results accuracy, but it may lead to increase the computation time. EMWorks2D comes with a flexible and user friendly mesher. It allows to add mesh control on specific surfaces and edges where the results could be very sensitive to the mesh. Figure 3 shows the meshed model while a mesh control is applied to the air gap. 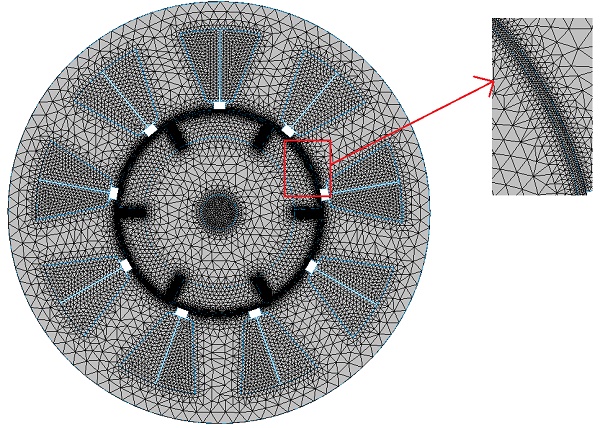 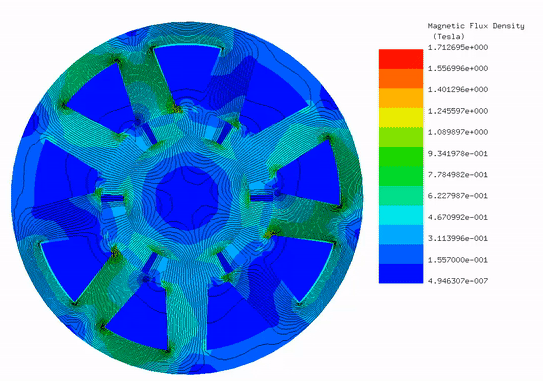 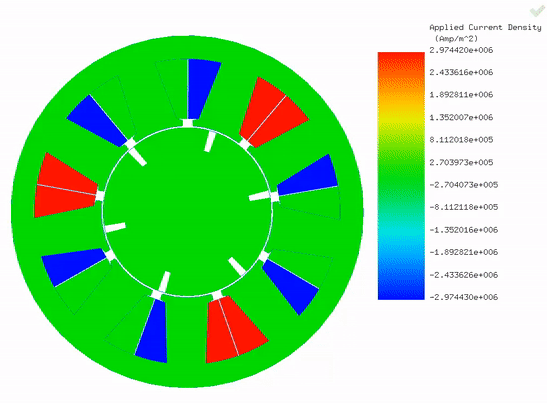 and compare them with the presented results in [3]. The torque curve is characterized by small ripples amplitude but considerably a high number of ripples (totally 18 ripples in one full revolution). The maximum and the minimum values of the computed torque are respectively 2.05 N.m and 1.53 Nm. The average developed torque is around 1.89 Nm.

Figure 9 gives the static torque curve (average produced torque) versus ampere-turns. It shows that the torque is proportional to the ampere-turns. When there is no excitation, the torque value is around 0.1Nm (Cogging torque) and it increases to reach an average of 1.89 Nm at 2916 A-t. This linear dependency shown in the Figure 9 of the static torque generated by the BLDC is considerate as an advantage of brushed DC motor. Hence, it is an inherited advantage to the BLDC without using commutators and brushes. 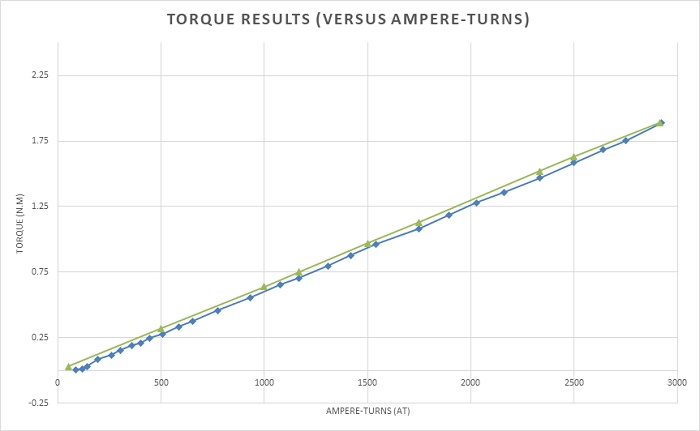 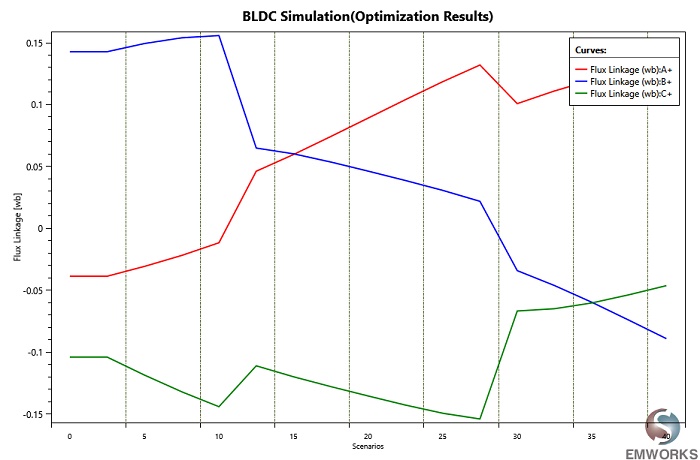 The proposed BLDC motor was simulated using EMWorks2D. Magnetic flux, torque and inductance results are accurately generated versus rotor angle. 2D FEM solution provided by EMWorks2D helped to study efficiently the proposed model. A reduced computation time is achieved, and this can offer more simulation scenarios. However, 2D simulation has some drawbacks such as neglecting end effect, axial flux, skew which cause results to be imprecise. Thus, a 3D simulation is essential to estimate all the results while considering most of the real-life conditions.