What is an eddy current brake?

Eddy currents are generated inside electrical conductor by electromagnetic induction phenomenon. Static electric conductor immerged inside a time-varying magnetic flux and/ or a moving electrical conductor inside a static magnetic flux will lead to the creation of eddy currents in this conductor. This phenomenon appears in many technical problems and in a variety of life situations. A long time ago Eddy currents have some undesirable effects because of their dissipative nature. They can cause the heat of the material and reduce the efficiency of the application such is the case for transformer cores, electric generators and motors, high power cables, wireless power transfer, etc. Thus, engineers have implemented different methods and solutions to name but a few, laminated materials, Litz wire, and cooling systems to reduce the damages caused by the eddy currents. Conversely, other scientists and engineers saw a great benefit in eddy current and used them in several applications such as metal detectors, induction heating and cooking, induction motor, eddy currents brakes, NDT sensors, etc.

In this article, rotary eddy currents brakes (ECB) will be studied. Typical braking systems (hydraulic, pneumatic, mechanic) employed in most engines, are designed to slow or halt the motion of vehicle by converting kinematic energy to heat energy by friction. These types of brakes suffer from several drawbacks like overheat, wheel damage, boiling or leaking of the brake fluid, low air pressure in pneumatic brake, regular maintenance, etc. Nowadays, eddy currents brakes, have been enhanced to meet the requirements of the developed industry. The brake is basically made of electromagnets and/or permanent magnets which generate static magnetic field. Induced currents are produced inside the rotating disk. Lenz’s law states that the direction of the induced current in an electrical conductor by variation of magnetic field is such that the magnetic field created by these currents is opposite to the initial variation of the magnetic field. Hence, the developed torque, which is proportional to the speed of the moving disk, will be opposite to the motion direction. Contactless electromagnetic brakes have several advantages such as wear-free, frictionless, less noise, low maintenance, protection from overheating, safety, high efficiency in high speed, etc. They are used in many applications like traditional and maglev trains, automotive and heavy engines, roller coasters, gym and rowing machines, robotic and medical equipment, wind turbines, etc. However, free-wheel magnetic brakes have some weaknesses such as low torque at low speed, no ability to hold the moving load at stationary position, necessity to be equipped with friction brakes, etc. 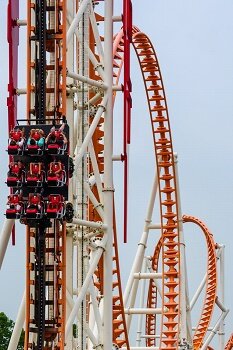 Both engineers and researchers Collaborated to come-up with innovative and robust eddy current brakes. Finite element (FE) solution has shown its reliability in studying contactless magnetic braking than analytical solution which uses several assumptions that may reduce the results accuracy [1. It can provide a complete solution of electromagnetic brakes taking into account most of the real-life conditions. EMS from EMWorks Inc., is a 3D FEM simulation software, is used in this article to analyze the rotary eddy current brakes. EMS couples electromagnetic solution with mechanical analysis to compute the following results: magnetic flux, generated eddy currents, produced braking torque, eddy losses in the rotating disk, angular displacement and velocity, etc.

During the later simulation, two analyses will be performed:
- Transient mechanical response is not considered. Torque versus time will be computed while the disk is rotating with a constant speed.
- Transient mechanical response is studied. Torque versus time will be computed after applying an initial velocity to the rotating disk.

Figure 2a) and 2b) show respectively an isometric and side views of the ECB proposed model. It is made of two non-touched components (separated by air): a rotating copper disk, fixed arrangement of permanent magnets, and back iron core (see Figure 3). The remanence of the permanent magnets (NdFeB) is 1.25 T and the relative permeability of the iron core is

. Electrical conductivity of the copper is the following:

while, it is neglected for the iron material. 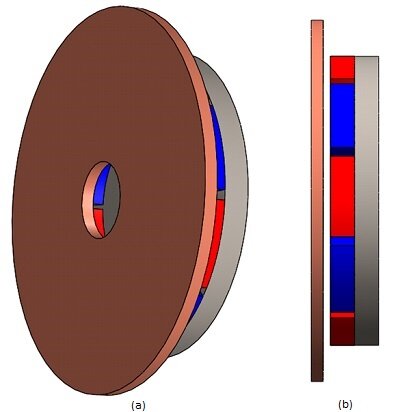 Figure 3 - Arrangement of the permanent magnets and back iron core

Figure 4 contains cross section view of a mesh plot. The mesh element size ranges from 1.3 mm located in the copper disk to 10 mm in the iron core. The mesh can be adjusted manually using EMS mesher. To capture efficiently the eddy currents, a smaller mesh element size is applied on the disk surfaces.

In this case, the disk is being rotated with a constant angular speed (1000 rpm anti-clockwise). Eddy currents, generated in the copper disk, will create an electromagnetic torque acting in the reverse direction to the motion. Figures 5a) and 5b) show respectively, fringe and vector plots of the magnetic flux density in the permanent magnets and the iron core. The magnets have alternating directions (+/-) along the iron core axis. The iron core is used to reduce the magnetic flux losses and to orient the field to the direction of the disk. Moreover, it constitutes a magnetic shielding that protects equipment and electronics, such as rails sensors and signals, from electromagnetic interference. H field plot is shown in Figure 6. 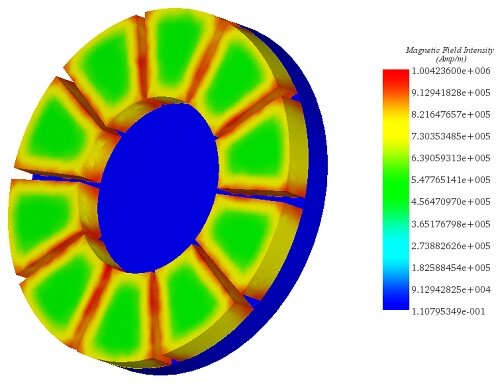 Figures below illustrate the eddy current distribution inside the copper disk. they show several loops of current facing each magnet pole and their directions depend on the magnetization direction of the magnets. The highest induced current is about

. Since the speed is constant, the eddy currents are remaining invariable during the simulation time as shown in the animation in Figure 8.

Figure 8 - Animation of the current distribution

Figure 9 contains the torque results for different speeds: 500 and 1000 rpm. For both curves, the torque is constant and negative over time. This is due to the positive direction of the disk rotation and according to the Lenz’s law, the torque generated by eddy currents will be opposite to the motion.

The bleu curve represents the torque produced when the speed is 500 rpm while the red curve gives the torque generated in the disk when the speed is 1000 rpm. The bleu curve shows lower torque values (10Nm) than the red curve (12.6 Nm). Thus, the higher the speed, the higher the torque is. Hence this justifies the use of this kind of brakes in high speed applications. The torque becomes larger at high speeds as a result of the eddy current where its value becomes important when increasing the speed. It may, nevertheless, lead to more generated heat in the moving parts. 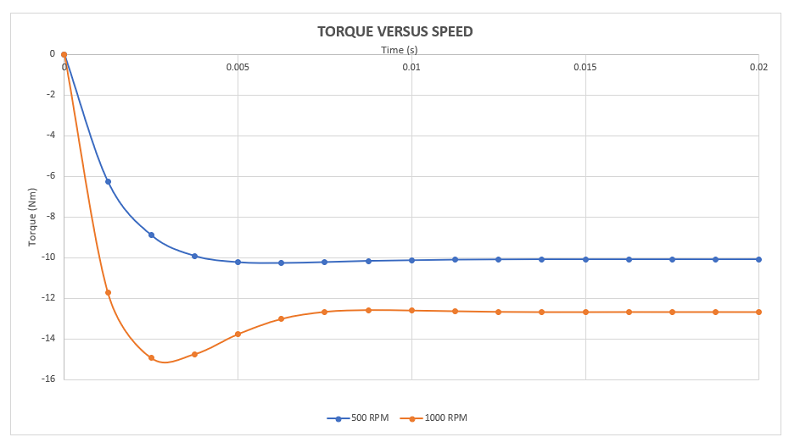 In this section, the braking phase (disk deceleration) is studied. Initially, the disk is rotating with the speed of 1000 rpm, the load torque is suppressed, and the braking torque is applied to slow down the disk. Transient Module of EMS coupled to SOLIDWORKS Motion analysis are used to solve both electromagnetic and mechanical problems. The transient simulation duration is 0.2s. Figure 7 demonstrates plots of the eddy current generated by the rotation of the disk inside a static magnetic field produced by the permanent magnets. Figures 7a) contains the current distribution at 0.005s. The current density peak is around

. This value is measured when the velocity is 1000 rpm. The maximum of eddy current density at 0.05s is about

at the initial angular speed to very low values at speeds close to zero. Hence, this can confirm that the eddy currents are proportional to the speed. Moreover, as can be observed below, the eddy current loops start to disappear when the speed becomes low. 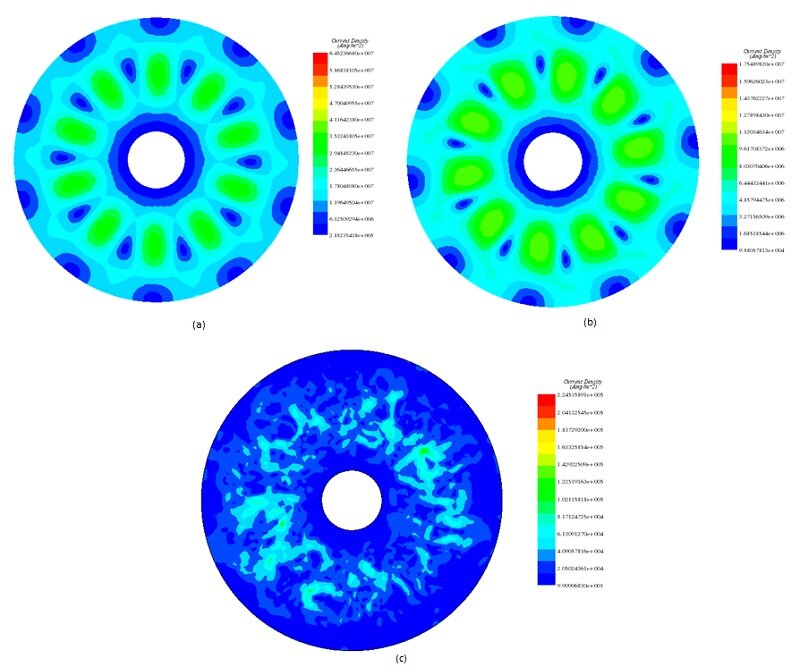 Figure 11 shows the eddy loss (W) generated by the eddy currents in the spinning disk. Having a behavior identical to the current density, it has a peak of 900W at 0.005s when the speed has its highest value (1000rpm), then it decreases when the disk is decelerating. 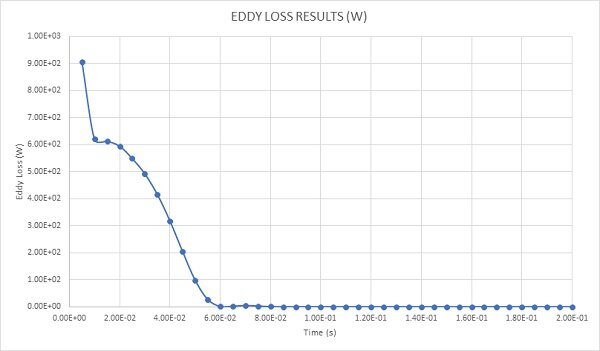 Figure 12 superimposes the curve of the electromagnetic torque and the disk angular speed. It shows that the torque, generated by eddy currents in the disk, decreases from -3.7 Nm at 0.005s to -2.24Nm at 0.01s, then it increases to reach its highest value around -6 Nm at 0.04s. This can explain the behavior of the disk velocity which drops down from its peak value (1000rpm) at 0.005s until becoming null at 0.057s. Both the angular speed and the torque have opposite directions: the disk is moving in the anti-clockwise direction while the torque has a clockwise direction until 0.57s and reversely from 0.057s to 0.09s (Lenz’s law).

When the speed becomes low, the torque starts to decrease again. After the steady state is achieved (0.1s), both electromagnetic torque and speed are close to zero. This magnetic brake takes 0.057s to stop the disk from rotating.

In the Figure 13, a comparison of the angular position results of the disk is established. Two cases are studied: when the eddy effect in the disk is enabled and disabled. The bleu curve represents the motion of the disk when there is no eddy current, i.e., the braking torque is null. The disk continues to rotate freely. It achieves 3.33 revolution during the simulation time (0.2s). The red curve shows the angular displacement of the disk when there is eddy effect on, i.e., the braking torque is applied. The disk is halted at 0.57s after a displacement of 161 degree. 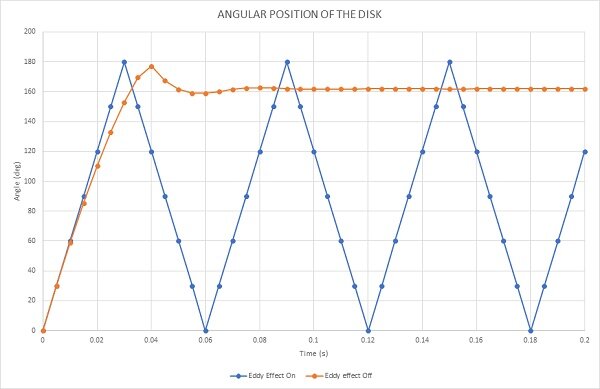 Figure 13 - Angular displacement of the disk

Figure 14 contains an animation of the eddy current distribution during the deceleration phase of the disk. It illustrates the diminution of the current with the speed.

Eddy current braking system is widely used and exploited in several fields thanks to its many advantages compared to traditional brakes. In this article, a rotating permanent magnetic brake was studied using EMS and SOLIDWORKS Motion. This duo has shown a high capability to analyze such complex system by giving electromagnetic and mechanical results under several conditions. The torque generated by the eddy currents was predicted for different speeds and phases (mechanical steady state and deceleration phase).