Cooking is one of the oldest of technologies and for obvious reasons: humans would never have survived (let alone thrived) without perfecting the art of feeding themselves. The basic idea of cookery—heating food to kill bacteria and make something tasty—is fairly prehistoric: "food plus fire equals cooked food" is roughly how it goes. There's not an awful lot of difference between roasting a hunted animal on an open outdoor fire, as our ancestors would have done, and cooking it with electricity or gas in an oven, as we do today [1]. That's not to say there's been no progress in cooking technology. In the 20th century alone, ingenious inventors came up with two brand new forms of cooking. One, the microwave oven, uses high-energy radio waves to heat food quickly and efficiently in a fraction of the time you need with a conventional stove. The other, induction cookers, use electromagnetism to turn cooking pans into cookers (creating heat energy inside the pan itself, instead of firing it in from outside), which cooks food more quickly with less energy. In the previous blog (Induction heating – Engineers empower chefs) we have talked how induction heating works. In this blogpost, we will see how EMS can help engineers develop a healthy induction cooktop.

Induction heating is a complex process coupling the electromagnetic and thermal phenomena. In this process, an alternating electric current induces electromagnetic field, which in turn induces eddy currents in the workpiece. The induced eddy currents release energy in the form of heat, which is then distributed throughout the workpiece. Such problem constitutes a hard challenge for engineers. EMS helps to solve it due to the possibility of the coupling between all this phenomenon. AC magnetic study coupled to thermal gives necessary results: magnetic flux density, applied and eddy current density, the value of inductance which a main parameter needed in the power electronic, the temperature and heat flux etc.… Below, is a CAD model of commercialised induction table designed with Solidworks CAD.

Figure 2 - The work coil situated in the bottom of table

Figure 3 shows the magnetic flux in the induction cookware which is concentrated on the iron cores, while figure 4 shows the eddy current in bottom of the pan. 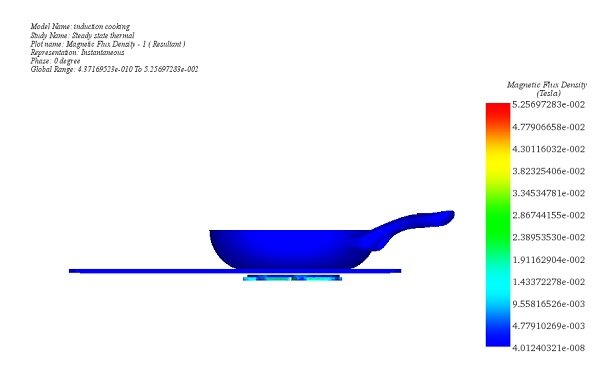 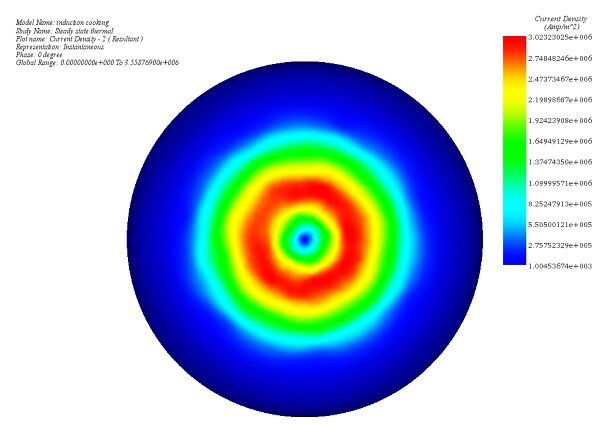 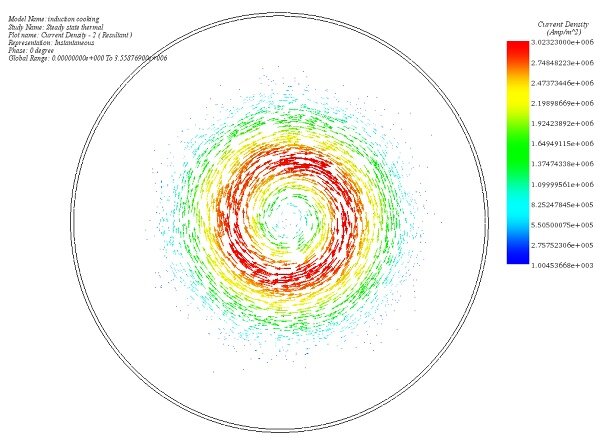 In the figure 5 a and 5 b we can see the temperature distribution in the whole table and in the pan respectively. 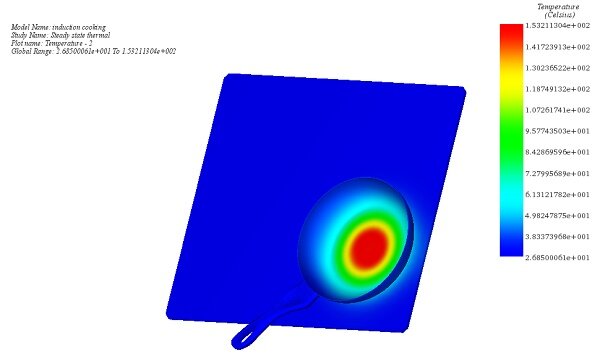 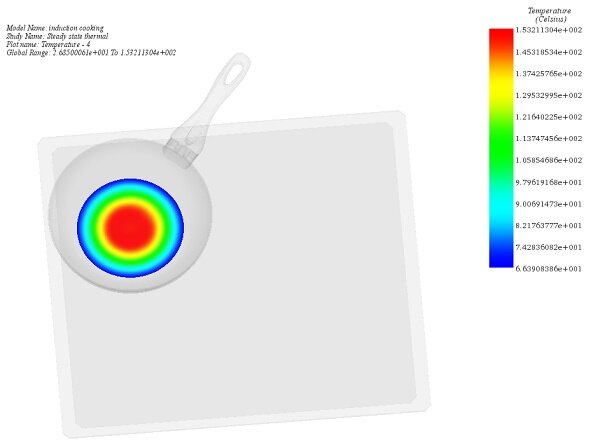 Figure 5 - Temperature distribution, a) in the whole model b) in the surface of pan 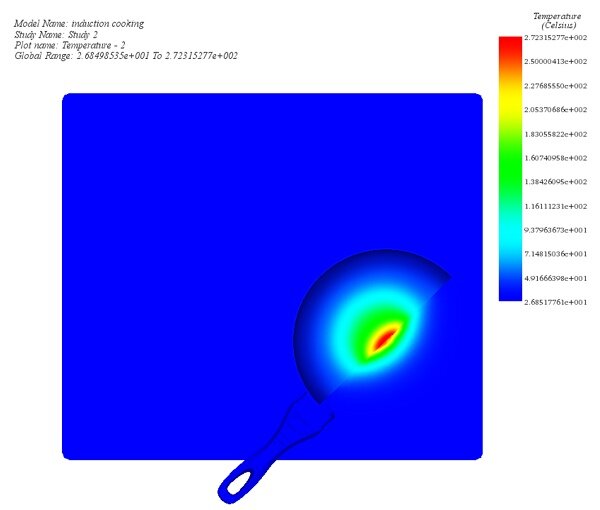 The figure below shows the time variation of temperature at a point located in the bottom of the pan. 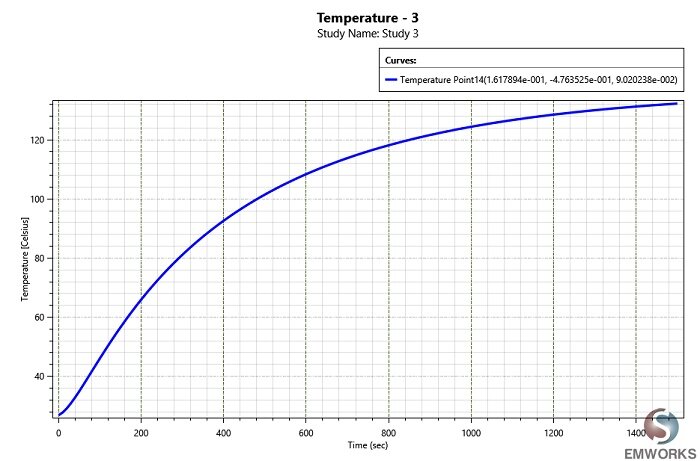 Figure 7 - Temperature variation in the bottom of the pan

What is the Induction cooking risk? 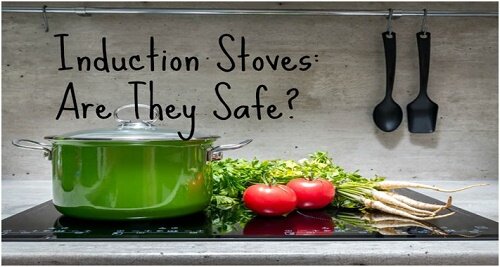 There are inherent dangers in every type of cooktop. Electric elements stay hot for a long time, posing a burn and fire danger. Gas stoves can leak or cause explosions. For many people, the use of magnetic fields to cook food raises concerns about the health and safety of this relatively new technology due to its theoretical effects on biological processes. There is no definitive answer as to whether the electromagnetic fields created by an induction cooktop are dangerous to humans. According to the Federal Office of Public Health of Switzerland, it is possible to limit your exposure to the fields, thereby reducing any potential risk, by using the appropriate size and type of cookware, keeping a distance of at least two to four inches away from the cooking surface and using non-metallic utensils for cooking. Individuals with pacemakers or implanted defibrillators should check with their doctor before using an induction cooktop. The danger of burns from induction cooktops is low, since the surface does not actually heat up. EMS can help engineers to limit the Electromagnetic fields generated by induction cookware and limit their risk on the human life. By visualizing the flux density around a table, we can know the area covered by electromagnetic field and avoid it. EMS helps to make this technology more safety[2]. Electric and magnetic fields can induce electrical currents in the human body which, above a certain intensity, can acutely stimulate the nerves and muscles. To avoid effects of this kind, the European exposure limits are defined, such that the currents flowing in the body shall be 50 times lower than this value. The underlying limits, known as basic restrictions, limit the current density, a term which describes the flow of current through an area. The permissible current density is 50 times lower than the level at which the nerves and muscles are stimulated. Current densities cannot be measured directly in the body. They can be calculated with considerable experimental effort using body phantoms and numerical simulations. These difficulties are overcome by using values known as reference values. They are derived from the basic restrictions and can be measured as the strength of an electric and magnetic field in the absence of a body. Reference values ensure that the associated basic restrictions are not exceeded. They are particularly useful in cases where the whole body is exposed evenly. In cases where the electric or magnetic fields of an appliance exceed the reference threshold value then a more detailed investigation step must be undertaken to determine whether the fundamental basic threshold values are respected. The following limits apply to induction hobs: Basic threshold values Reference values These exposure limits do not take account of the possible longer-term effects of electric and magnetic fields. The figure below shows that in our case and by using EMS the magnetic flux doesn’t exceed the limit value which is 6.25 micro Tesla in circle of 30 cm radius. 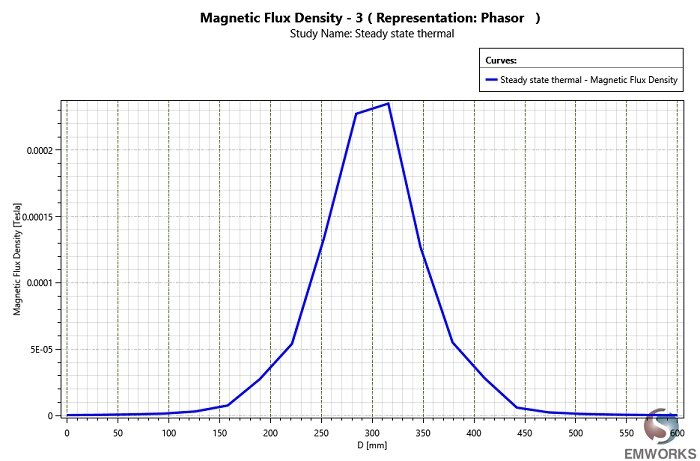 Induction cooking is becoming widely used thanks to engineers who are working hard to make it safer and more efficient. EMS in Solidworks can be part also of this work, it allows engineers to design and simulate their induction cooktops easily and quickly avoiding any loss in CAD design. For a full range of applications that EMS can handle, visit www.emworks.com