Renewable energy, known also as green or clean energy, is derived from natural processes that are regenerative over short periods of time and cannot be depleted. The most common renewable energy resources are biomass, geothermal, hydropower, solar, and wind.Essentially, the production of any clean energy does not result in the creation of environmental debt. Additionally, the technologies used in producing this energy pollute less or do not pollute at all while they also do not utilize resources that cannot easily be renewed.

What role does renewable energy play in the United States?

Until the mid-1800s, Wood was the main source of energy that covers all the US needs for heating, cooking and light. After the industrial revolution, the transition of new manufacturing processes has come with new energy sources. First, the fossil coals were the principle energy supply for a long period of time. Later and after the discovering of petroleum and natural, the map of used energy resources gas has changed again. More recently nuclear, hydroelectric and renewable energy gained more space in the US energy repartition. Figure 1 shows the evolution of the energy consumption by major sources in the US starting from 1700 until now [1]. 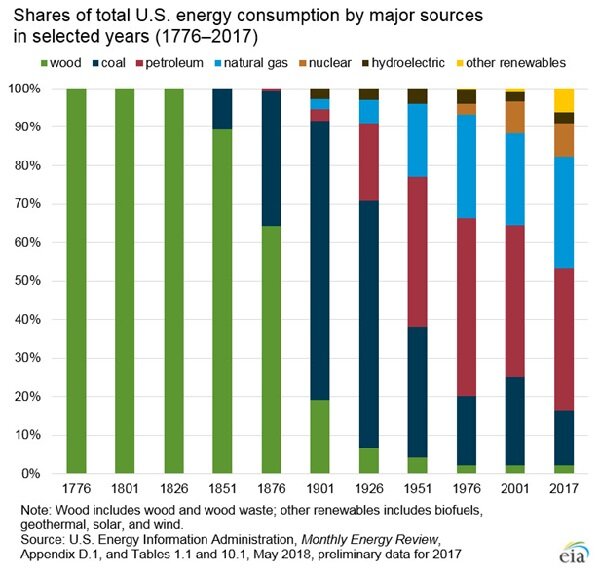 Figure 3  -  Evolution of the energy consumption in the US

Renewable energy plays an important role in reducing greenhouse gas emissions. Using renewable energy can reduce the use of fossil fuels, which are major sources of U.S. carbon dioxide emissions.
The use of renewable energy more than duplicated from 2000 to 2017 thanks to the encouragement of the state and federal governments. The U.S. Energy Information Administration projects that U.S. renewable energy consumption will continue to increase through 2050. 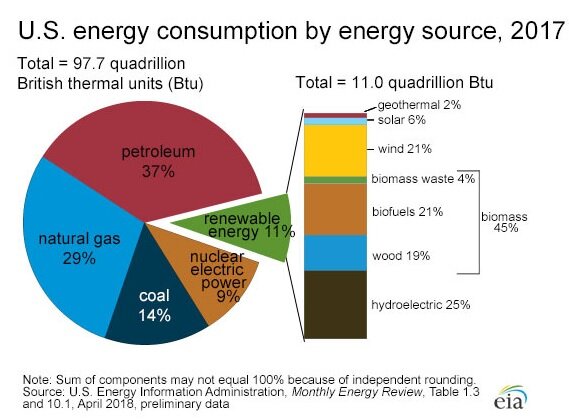 Wind energy constitutes more than a quarter of the total renewable energy as shown in the Figure above. The wind is a clean, free, and readily available renewable energy source. Each day, around the world, wind turbines are capturing the wind power and converting it to electricity. This source of power generation plays an increasingly important role in the way we power our world. These wind turbines use several types of electrical generators such as three phase axial flux machine.

Permanent magnet (PM) machines have been replacing other types of electrical machines in many applications and fields. High energy density, high reliability of PM materials, great corrosion resistance and demagnetizing influence are the main advantages of the increase of developing PM generators. The new PM materials are less sensitive to temperature variation. Design and developing wind generators demand the main requirement as follows:
The contemporary power electronics characterized by higher efficiency, reduced losses and temperature rise, less complicated command and lower cost offer the possibility to change the output voltage and frequency of the generator to match the system needs. Different PM machine are used to convert wind energy such as PM synchronous machine, PM axial flux generator, etc.
In this article, a 3 phase PM axial flux machine is analyzed. This type of machines may have core or be coreless and they are used due to many reasons such as being highly efficient, economic, compact size and light weight, etc. It has been demonstrated in [2] that the axial flux machines have shown better results compared to radial flux machines. It has been discovered that axial flux generator is less expensive.Furthermore, axial flux permanent magnet generator with coreless stator is considered as machines having high power density for energy-generating systems [3].
The proposed model is shown in Figure 3. It is built using SOLIDWORKS CAD.The stator is made of 9 stranded coils forming the 3 winding phases. Each phase is grouping 3 series coils with 90 turns in total.  It is inserted in the mid planeof the machine between the two sides of the rotor (Upper and lower sides).  Each rotor side is composed of 12 permanent magnets and a laminated steel core. Table 1 shows the properties of the Neodymium magnet 4212 used for the permanent magnets while Figure 4 contains the BH curve of M-19 used for the rotor cores. 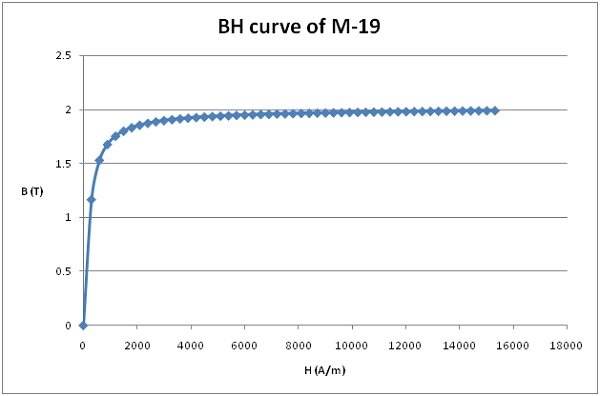 EMS, as a plug-in inside SOLIDWORKS, has the capability to couple electromagnetic fields with SOLIDWORKS motion analysis.This coupling combines both mechanical and magnetic loads.
In the case of generator, EMS Transient module coupled to SOLIDWORKS motion is used to compute the induced voltage at each phase. The rotor is rotating with the speed of 1000rpm.
The simulation is performed for 0.01s. Figure 5 shows the SOLIDWORKS motion study.

Figure 5 - SOLIDWORKS motion study.
EMS meshes the simulated geometry with tetrahedral elements. The total elements number depends on the dimensions, the shape of the model geometry. EMS allows to control the mesh size on specific bodies or surfaces to enhance the accuracy of the results in these zones. Below is the meshed model. 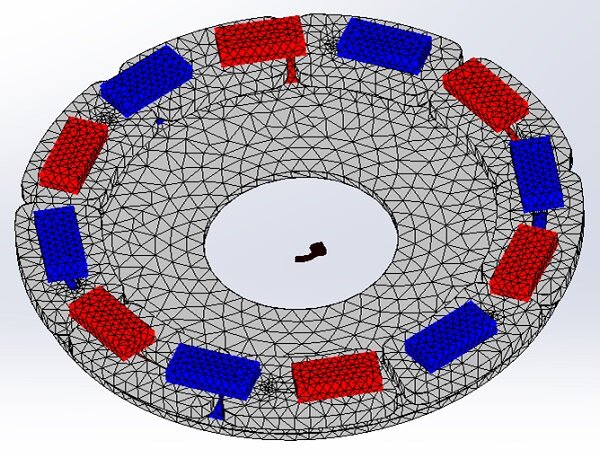 Instantaneous magnetic results are computed and generated by EMS Transient module. Transient module of EMS is used to compute instantaneous magnetic quantities such magnetic flux, magnetic force and torque, eddy currents, electromagnetic losses, induced voltages, inductance and resistance matrices, etc.  Figures 7 and 8 illustrate the magnetic flux density respectively fringe plot in the whole model and vector plot in the magnets at 5.5ms. The vector plot demonstrates the magnetization direction of the PM.  They are axially magnetized. Figure 9 shows the magnetic field plot at 10ms.  Figures 10 and 11 contain respectively angular displacement and velocity of the rotor. The rotor speed is constant at the value 1000 rpm. 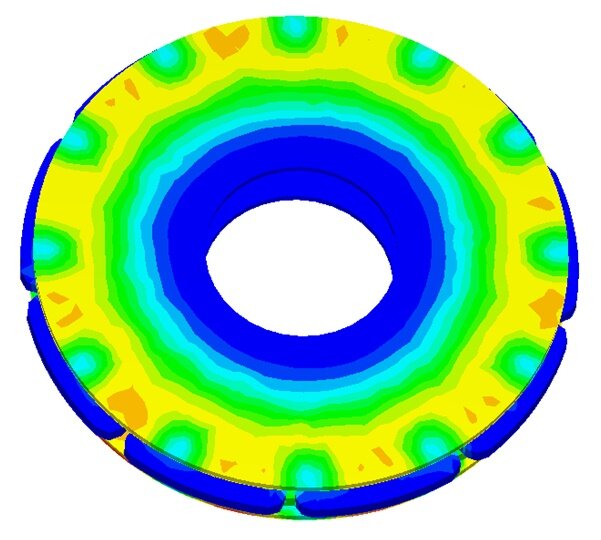 Figure 7 - Fringe plot of the magnetic flux density at 55ms Figure 8 - Vector plot of the magnetic flux density at 55ms 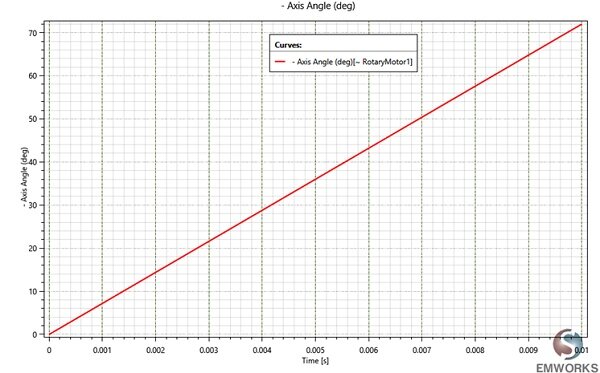 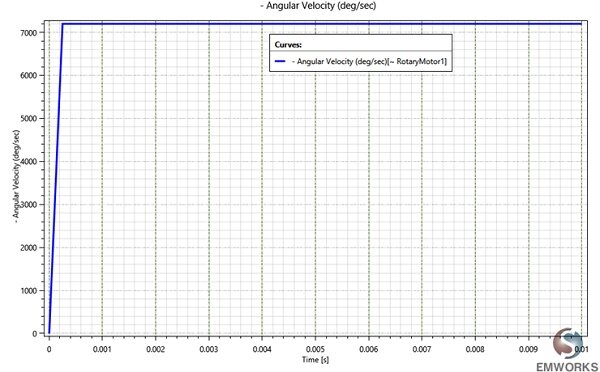 Figure 11 - Angular displacement
Figure 12 demonstrates the induced voltage at each phase versus time. The computed signal has a sinusoidal shape. The induced voltage curves have a maximum value of 37V. The signal frequency is calculated using the time period of one phase. The period of time extracted from Figure 12 is 0.008333s which leads to a frequency of 120Hz. The induced voltages of the studied axial flux generator is a sinusoidal signal with the following characteristics: Amplitude=37 V, Frequency =120 Hz. Figure 13 shows the flux linkage results versus rotor angle. It has the same shape of the induced voltages. The resistance of each phase is 0.45 Ohm . It is constant versus time since the coils are stranded (eddy currents neglected ) and the used steel has no electrical conductivity. The static inductance is 0.146 H. Dynamic inductance of each phase is plotted in Figure 14. 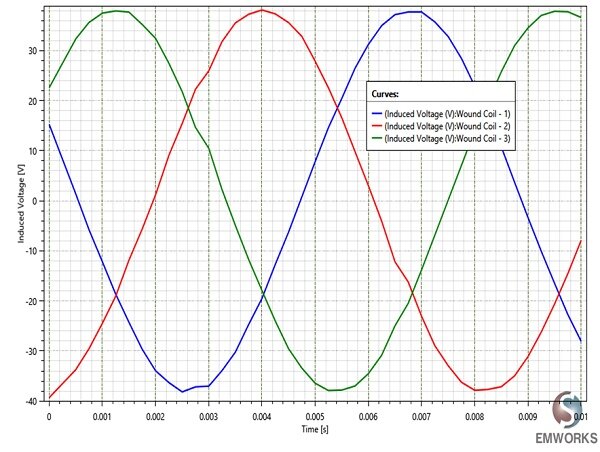 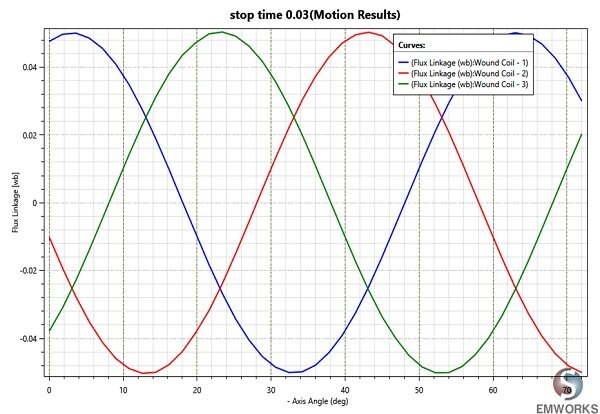 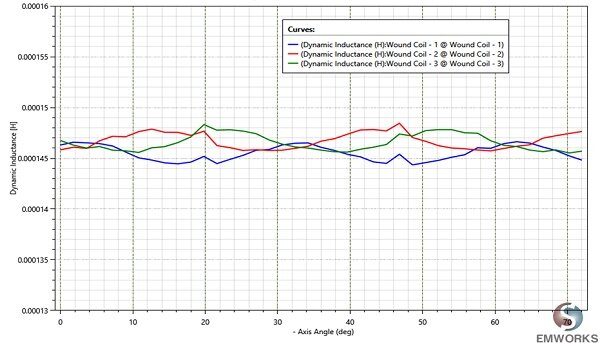 Figure 15 -  Animation of the magnetic flux density versus time

The development and the improvement of clean energy sources is going too fast thanks to its high demand. It is a main player that will help to reduce the global warming. Among these energy sources, wind is used to produce electric energy. Onshore and offshore wind farms are installed to collect wind power and convert it into electricity. These wind turbines can be equipped with axial flux generator due its advantages such as low cost and effortless construction. EMS has shown a high capability to analyze and study this type of electric machines. The coupling with SOLIDWORKS motion allowed to unite electromagnetic and mechanical inputs to generate full results such as induced voltages, dynamic inductance and resistance, speed, displacement, etc. This will help to design and prototype efficient machines in a shorter time.